In Our Community Pride Month Employee Spotlight: “I have loved how I’ve grown.”

Ashleigh Dreher is an avid reader, an advocate for LGBTQ+ rights, and a customer care specialist at Atlantic City Electric. She took some time to chat with us during Pride Month as part of our ongoing series of employee spotlights.

Ashleigh started her Atlantic City Electric career when she was just 22. “I have loved how I’ve grown,” she told us, “Over the last six years I’ve really watched myself evolve.” Between her own voracious curiosity and the emotional intelligence her role in customer care requires, Ashleigh said there is always something new to learn. Even though she is early in her career, she has already had the chance to fill supervisory positions. She has also been a part of testing call center policy and procedure changes. Every call that comes in is different and the team works to shape their responses to the customers’ needs. To that end, they are upgrading their recording systems to track trends and better assist customers who call in more than once. 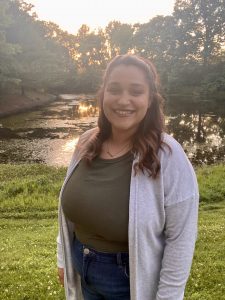 Her day-to-day work isn’t the only thing that keeps Ashleigh engaged; she is also involved with Atlantic City Electric’s Pride Employee Resource Group (ERG). She joined after her father, who also works for the company, participated in an allyship event with Atlantic City Electric’s Pride ERG and encouraged her to check it out. “Even with having me as a gay daughter, he still had a lot to learn, and he saw Pride ERG as an opportunity,” Ashleigh shared. Although she was hesitant to get involved at first as her position requires her to be fully attentive to customers while she is at work, Ashleigh said her supervisor was supportive and helped her find time in her schedule to volunteer. She was also pleased to find the group to be welcoming and open to new ideas. She was recently selected to be a board member. This year, she is spearheading a brand-new initiative – a Pride book club.

The first book on Ashleigh’s list is “Tomorrow Will be Different” by Senator Sarah McBride (who will speak at a Pride ERG event this month!). While the author is transgender and Ashleigh is not, she said it is easy to see connections between different LGBTQ+ experiences and that learning helps each of us with our own biases. From the “shelves upon shelves” of books Ashleigh described, she worked with the team to select seven titles to start. We suggest using these titles (listed below) as the start of your own Pride-theme summer reading list.